Why do We Have Two Ears? 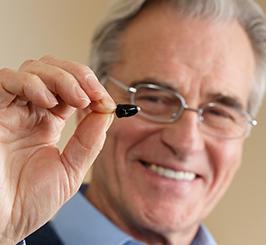 Binaural hearing means that we are hearing with both of our ears. Can we hear with just one ear? Yes, but our brain is receiving only half of the sound picture.  This makes it more difficult to process and understand speech, especially if there are other competing sounds occurring in the background at the same time.  We could somewhat compare this to pealing a banana with only one hand.  One is able to accomplish this task with some difficulty, but it would be so much easier to do so with the use of both hands. Nature gave us two ears and two hands for a very good reason.

When a hearing loss presents itself in both ears, the question is often not do I need a hearing aid, but should I wear one in both ears?  The benefits of aiding both ears are better sound discrimination and improved understanding of speech.  Many sounds of speech are very similar, and when heard with one ear, can sound the same.  When they are heard well in both ears, however, they are more easily identified. An example of this would be to similarity between the words cup and cut, and wish and with.  When speech is presented equally to both ears, our brain combines both inputs and we sense a single sound picture.  With one ear hearing better the other, the brain has incomplete and different information coming from each side which makes speech much more difficult to interpret.

Another advantage of binaural amplification is improved localization of sound and speech. Our brain finds a sound source by measuring minute differences in duration and intensity of sound as it arrives at each ear and we know instantly its location.  When only one ear is hearing the sound, it is much more difficult to know that location and often the source is perceived to be on the better hearing side, which it may actually be on the reduced hearing side.

Finally, listening with one ear can be physically tiring and stressful.  This is less often the case when utilizing the best possible hearing in both ears, and the need to always turn a “good ear” toward the speaker is also eliminated.

The decision to wear one or two hearing aids when there is hearing loss I both ears is a personal decision. Many factors enter into that decision.  These are just a few thoughts to consider.

This article was written by Dolores Y. Payne, M.A, CCA-Audiologist, and Owner of Allegheny Hearing Instruments.

Six Strategies to Increase Communication with Individuals with Hearing Loss

The Difference Between Assisted Living Care vs Nursing Homes