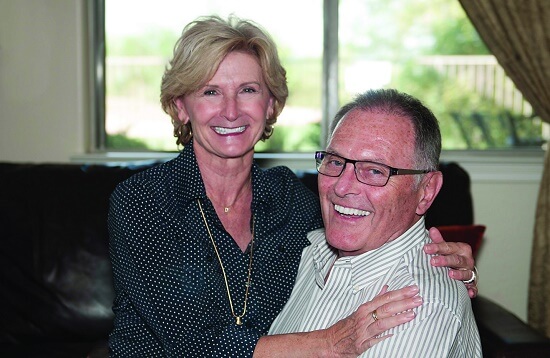 Danny Davis has been a Morning Radio Show Host for 51 years, 21 on air in Phoenix.  If his name is mentioned to those who followed his morning show on KOY, the oldest radio station in Phoenix, one hears the accolades about his talented, personable, beloved, interesting personality. Prior to KOY, he spent time in the broadcast field with stations in Denver, San Diego and Portland, however Danny, his lovely wife/partner Dee are the first to say that they love Phoenix and want to spend the rest of their days here.

In 2013 KOY was sold and the format went from talk to business, Danny was unceremoniously told he was “not fired, but no longer needed”. This is the same story given to large number of baby boomers.

In spite of the fact that the population of 50+Consumers is projected to grow 34% by 2030, even with a bio as impressive as his, it’s not easy out there in the job world for those in their 50’s & 60’s. Danny shares openly with a combination of dignity, candor and wit, his frustrations in finding another career in the radio business in the Phoenix market. Many of the station owners believe that it’s more lucrative to serve the younger demographic even though there is a strong growing older audience.

During most of Danny’s years in radio broadcasting, his wife Dee has been by his side and often on the air with him, his fans grew to love their on-air authentic, humorous way of sharing about the daily trials of life including their pets and whether he had remembered to take out the trash. The audience loved their bantering! Dee participated in most of his remote broadcasts, plus co-hosted on-air contests to win trips and cruises. They developed close friendships with their listeners.  Dee explains that for Danny, radio broadcasting was never a job because he loved it so much. They stay optimistically hopeful that a full time opportunity for Danny to play the music and talk the talk of our generation is right around the corner.

Danny and Dee initially met in their 20’s in Denver while both married to others. Dee hailed from Kansas and Danny was born on a wheat and cattle farm in Idaho, raised by his single mom who was the Country Auditor. The connection they had felt from their earlier friendship began to grow into something much deeper after reconnecting years later after they had each divorced.  It was a natural progression for them to marry and make the commitment to grow older together. With pride they speak of their daughter and son-in-law Andi and Brian, who recently relocated to Park City, Utah after 16 years living in Singapore, Tokyo and London.

They adore their rescued pets and love telling stories about their eccentricities.  Their home is filled with interesting art and collectables from around the world. Dee points out her Buddha collection and her peaceful attitude about living a life practicing kindness and giving back. “I’ve never been around anyone that’s more caring for animals, people and her environment. She’s got a huge heart, incredible character as honest as anyone I know…and a great kisser!.” says Danny.

They comfortably finish each other’s sentences and laugh about their nicknames for each other. Dee is “Buns” and Danny is “Big Boy” - their fans love it!

This is a baby boomer couple growing older together but trying to holding on tight to their optimism our generation was taught and an attitude that everything will turn out alright, in spite of the challenges. Danny finally began to understand that he can use his skillset, talent and experience in other directions.

Danny and Dee stay active running their new business “Danny Davis Media” where he offers his talent and experience doing Voice-over Projects, Audio Books, and Infomercials, among other things. You can read more about their services at: www.dannydavismedia.com.

Danny Davis still has several gigs around the Valley including being the Host of the Ms. Senior Arizona Pageant for the last 17 years, and hosting Club 55+Events at the Gila River Wild Horse Pass, where he ‘packs ‘em in’ on Mondays from 11am to 3 pm. You can also hear him on Sat & Sun 6 am to 10 am on KSWG 96AM “Real Country”. Tune-in, follow him on Facebook or better yet, go see him.