Why is a Contingency Plan Important?

By its very definition, a solo full-time caregiver’s responsibility is to directly provide care for someone else, 24 hours a day and 7 days a week.  In the event that the caregiver becomes incapacitated or otherwise unable to do her or his job, someone will be needed to fulfill the duty.  A contingency plan would ensure a smooth and legal transition to a different caregiver.  I spent innumerable hours pondering the legal, financial and ethical considerations of a contingency plan, and how to come up with one.

The plan would be to have someone legally designated as my Mother’s caregiver in case something happened to me.  They would not be required to live with her, as I did, nor to take care of her 24/7.  They would simply be permitted to see to her placement in a facility, and to take care of all the legal and financial needs of hers.

Think of some of the legal aspects of our duty as caregivers, solo or otherwise, and you will see that there are several angles to be dealt with.  Signing the care recipient into a care facility, hospital or doctor’s office; Designating DNR (Do Not Resuscitate) or other medical decisions and orders; Filing income taxes; those are some areas which I encountered over the years.  As I had POA (Power of Attorney) for my Mom, I was allowed to take care of all matters related to her care. 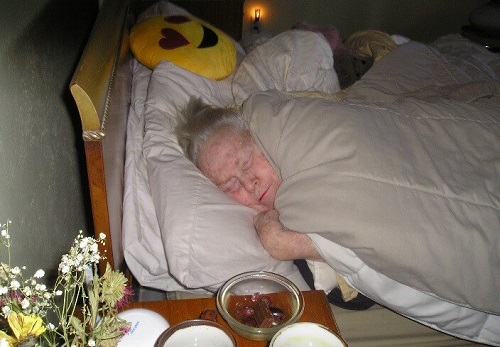 Because my Mother was no longer capable of designating a successor agent to take over POA duties, should I become unavailable, I found that I needed to pursue the matter differently.  I would have had to get the courts to designate me as her Guardian or Conservator, and while doing so I could designate someone else to be the successor agent should the need arise.

Guardianship and Conservator forms for Colorado, where I live, are available through the courts.  I downloaded them all, filled them out and printed them, but they were never used.  I dreaded the thought of having to go to court, because I most likely would have needed to bring Mom with me.  The logistics of such an outing were daunting, probably taking several hours more than we were usually away from the house, and I believe that my Mother would have been uncomfortable with, and frightened by, the lack of familiar terrain and the breaking of routine.

Mom was injured, but she was not stupid.  She would have known that going to court was serious business.  With the aphasia and dementia that she had, it would have been all but impossible to explain the situation to her.  And I could not have gone by myself……..because I did not have a contingency plan, by which I could leave her in someone else’s care while I traveled across town.  In the section below, marked “Ethical Considerations,” you will learn why I would not travel out of the neighborhood by myself.

I took care of all financial matters after Mom’s first stroke.  If I had become incapacitated, and since I lacked a contingency plan, there was nobody else who could have written checks or who would have had immediate access to my Mother’s funds to provide for her care.

If I had dropped dead or had become otherwise incapacitated, some governmental agency would, of course, have stepped in and placed my Mother in some facility.  The finances would have been worked out eventually.  I concede that point, as I did with some friends and family who pointed it out to me when I told them why I was in need of a contingency plan.  In the “Ethical Considerations” section below, it will become clear why this was a concern to me.  In short, I did not want someone else to have to figure out what to do with mom.

The gym that Mom and I enjoyed going to is just 6 blocks from home, and I would go there for a couple of hours while someone covered for me at home.  I figured that the further I drove, the higher the risk that I could get into a car accident.

Lacking a successor agent in a contingency plan, if a friend had been here at home with Mom, and I got into a car wreck, that friend would be left to figure out what to do with my Mother.  It would have been unethical for me to put anyone in such a position, and I refused to do so.  A few people have said to me, “But what about the times you hired someone to be with Marcie while you went to the gym?  There was risk there, as well.”  Yes, Dear Reader, there was some risk, but in my eyes driving six blocks was an acceptable level of risk.  To have driven to the mountains, or even to the foothills for a couple of hours increased the risk beyond what I would do.  That was my decision and I lived by it.

Stepping Away Without a Contingency Plan

I have shared in my book, “Just Before the Stroke of Seven” that after a couple of years or so of 24/7 duty, I simply had to take a break.  So I began to go to the gym by myself at night after I had put Mom to bed.  This left her alone in the house for about 2 ½ hours.  I had installed a sturdy metal gate at the top of the stairway, so that Mom would not fall down the stairs.  The gate was secured in a way that she most likely could not release.

For me, it was either step away or risk breaking down completely.  Sherry W., an old friend of Mom’s, reminded me to have faith and trust that God was watching over Marcie.  I was concerned about what could happen to Mom if someone broke into the house, or if it caught fire.  Mom would not have known what to do, as she was no longer capable of using a phone or thinking her way through most any situation.  But my mental health was on the line, the quality of my caregiving was diminishing, and if I broke down Mom would have a real problem on her hands with nobody to figure it out for her.

So I began going to the gym after putting Mom to bed.  Her bedtime was 7:00 and the gym was open until 10:00.  There were only a few times when I got home and could see that she had been up to use the bathroom.  Her canes were other than where I left them by her bed, perhaps one of them was in the bathroom, or her clothes were not all put back on after she used the toilet, or a light in the bathroom was left on.  Fortunately, no harm ever came to her while I was out.

I do not know the legality of what I did – leaving an at-risk senior alone at home.  I presume that I dodged a legal bullet and that since Mom is gone now, the point is moot.  I remember a family member laughing at me, at my thinking about this contingency plan business, and at my steadfast refusal to just take a long drive by myself into the hills.  I remember the laughter, but I do not understand it.

Aaron Ainbinder is the author of “Just Before the Stroke of Seven” which is available on Amazon.

Aaron Ainbinder, author of “Just Before the Stroke of Seven”, discusses

To help you better protect yourself and your family members, please review the

Helping an elderly parent use the bathroom might be the most uncomfortable part of being a...

Aaron Ainbinder, author of “Just Before the Stroke of Seven”, discusses the pros...

How to Not Lose Your Identity from Being a Caregiver

Are you one of the 40.5 million people in the United States who provide unpaid caregiving...

One reason why older adults might consider driving as long as they can: their mental health...