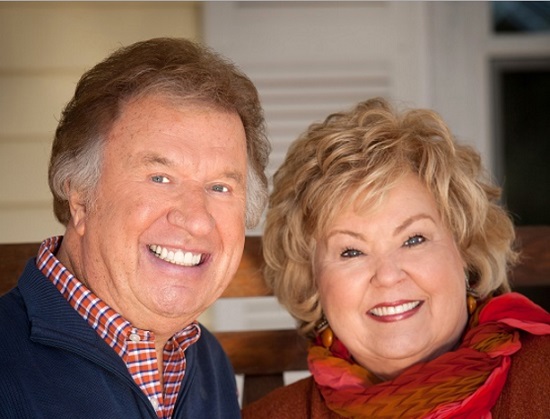 Because He Lives.  The King Is Coming. He Touched Me.  It Is Finished.  There’s Something About That Name.  Let’s Just Praise The Lord.  Loving God, Loving Each Other.

For most of us, these lyrics strike a chord deep within our hearts.  They create a sense of peace, hope and deep-rooted joy that take us to a place far beyond the stresses, worries and fears of this life.  For more than 40 years, the lyrics of these great classic gospel music songs have taught us how to truly worship to the Lord.  Bill and Gloria Gaither have not only changed the course of Christian music, but they created an entirely new road map to be followed.  The Gaithers have shared their hearts  by penning more than 700 gospel songs, but they did not always see how the hand of God was going to shape their future.

Long before Bill Gaither was a household name, this Indiana-born boy had two dreams in mind: one was to sing in a gospel quartet, and the other was to meet and fall in love with Doris Day.  Very quickly he attempted to make both dreams happen, but when it looked like all hope was lost, he decided that he needed a real career and went to school to be an English teacher.  He began teaching at Madison Heights Jr. High, and soon met his very own Doris Day, Miss Gloria Sickal.  They met in February, and on December 22, 1962, were married.

The first trio Bill formed was early in his college days, The Bill Gaither Trio, included Bill, his brother Danny, and sister Mary Ann.  When Mary Ann came off the road to raiser her family, Gloria joined the trio.  Together they began to premiere songs that are now classics.  Years later, when Gloria was ready to stop traveling, the Gaither Vocal Band was formed and still tours and records today.

“Our calling is not just making music, but communicating the reality of Christ,” Bill states.  “That might mean birthing a song about Him or simply offering a cup of cold water to someone who needs it.  Gloria and I have never claimed to have God figured out, but we do know that if He could use two imperfect people like us to communicate His Truth to the world, He can use everyone sitting in the audience, working on our staff, or singing with us.  If we have done anything right over the years, I hope we have built bridges where people could connect with God and with each other.  That is what started us writing and what will keep us going for the rest of our lives.”

Not only have the Gaithers been known for their songs, they have also brought Christian artists together for the same common purpose through video.  In the early 1990s, Bill discovered a video camera, which sent his calling into a whole new realm…. television.  The first video was called “Homecoming” and debuted on the 700 Club with a response that no one could have predicted!  The Gaithers went on to create more than 200 volumes featuring gospel music pioneers gathered around the piano singing the songs that inspired them over the years.  Millions of copies have been sold since 1991, and the Gaither Gospel Hour airs on more than a dozen television networks around the world every week.  Gaither Homecoming events have packed out prestigious venues such as Washington’s Kennedy Center, New York’s Beacon Theatre, Red Rocks Amphitheatre in Colorado, Carnegie Hall and The Sydney Opera House.

Now more than 70 years of age, and married over fifty years, Bill and Gloria are still going strong. The Gaither Vocal Band and the Homecoming Tour are still singing to packed out audiences with no signs of slowing down.

Bill and Gloria still operate their business from their hometown of Alexandria, Indiana, and they dwell in the same home where they raised their children.  They continue to focus their resources on investing in eternal things, including as much time as possible spent with their 3 grown children and 7 brilliant grandchildren.